Pieter Aertsen, a late 16th century Dutch painter, shows a butcher’s stall with a variety of cuts of meat, sausages, ham, fowl, and fish. Although the painting seems to be focused on the representation of meat, in the background, there is a biblical scene with the Flight into Egypt of Mary, Joseph, and Jesus.

Aertsen is often considered one of the founders of the still life genre of painting, which developed in the late sixteenth century. Many of his paintings show market stalls, kitchens, or feasts. His scenes of abundant produce and fresh meat make me want to cook up the lush ingredients that he renders in meticulous detail!

With the cold weather approached, I am beginning to crave “winter fare.” Out with the summer picnics and BBQs, and in with the stews, casseroles, and crockpots!

I decided to cook some short ribs recently that had been lingering in the freezer, but I didn’t feel like any sort of Asian-style short ribs on the BBQ. Instead, I decided I would get in the autumnal spirit a little early by cooking up the short ribs in the oven.

This recipe is fairly straightforward, and you could leave out the carrots and parsnips, or add other root vegetables as you see fit. I left out the mushrooms, because I don’t really like mushrooms. A lighter beer is probably best for this recipe, because darker beers would be too bitter. 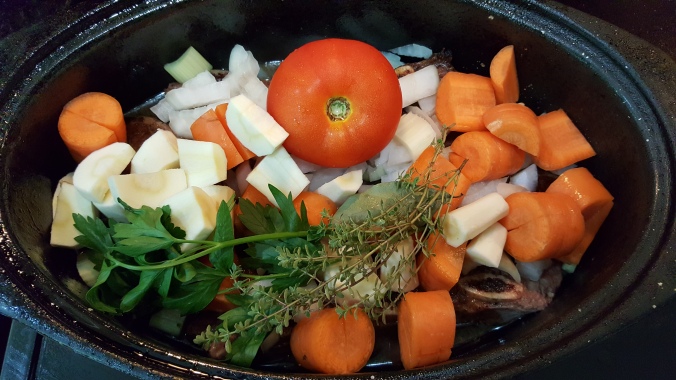 (The inspiration for this recipe was one at Chef Not Required)

1. Preheat oven to 325F.
2. Heat 1 tbsp of oil in a large flameproof casserole dish/dutch oven over medium high heat. Season with salt and pepper.
3. Brown ribs all over, adding extra oil if required. Remove to a plate.
4. Turn off stove. Add beer to de-glaze pan. Add vegetables to browned short ribs. Add balsamic vinegar, tomato paste, and herbs, then beef stock.
5. Once combined, add ribs.
6. Put lid on casserole. Cover & bake for 2.5 hrs. Meat should fall apart with a fork when ribs are ready. If not, place back in over for a further 1/2 hour.
7. Once cooked to your liking, remove ribs and vegetables from pot and keep warm. Simmer sauce on stove over medium heat for 5 mins to thicken. You can also add a flour slurry (2 tbsp flour mixed with 1/4 cup beef stock) to help thicken the gravy, if you like.
8. Serve ribs topped with sauce and a side of cheddar smashed potatoes.