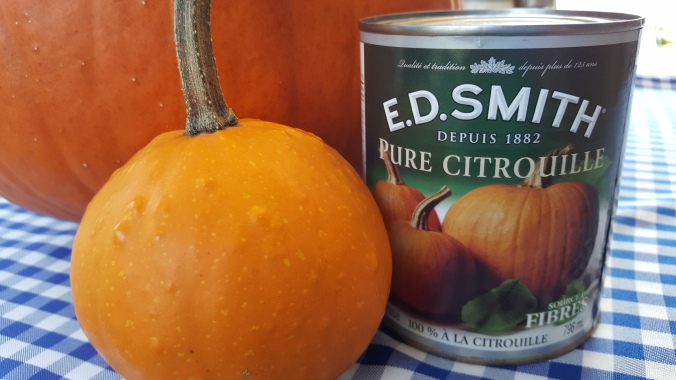 During October, we celebrate two holidays in Canada: Thanksgiving and Halloween. For me, the entire month is all about the sights, smells and tastes of autumn—the smell of crisp leaves falling, frost sparkling on the grass in the morning, and the firm end of the harvest season. Pumpkins are king in October. You see them decorating front porches and store displays, and jack-o’lantern images are found in every window. Vibrant orange gourds dot farmers’ fields as you drive past.

And they are delicious.

In the past 10-15 years, we have become obsessed with pumpkin [spice] everything during autumn. Not only are pumpkins drank in lattes, but they are cooked up into everything from layer cakes to cookies to seasonal lasagnas. I don’t recall ever hearing about pumpkin macaroni and cheese when I was kid. But now? Pumpkins feature heavily in October food, both sweet and savoury!

Out of curiosity, I checked into some old cookbooks recently at my grandmother’s house. Fascinatingly, old cookbooks might associate pumpkins with autumn, but they didn’t serve them in very many ways. One cookbook, the Laura Secord Canadian Cookbook, published in 1966, included only 4 pumpkin recipes out of hundreds of dishes that reflect “Canadian cooking.” Given that pumpkins are native to North America, and have been consumed for centuries, I found this lack of pumpkin recipes interesting. Other cookbooks from 50 years ago are similar—they might include a recipe for pumpkin pie, perhaps one simple cake or muffin recipe, and occasionally a version of pickles, but rarely anything else.

In the spirit of history, I cooked up the pumpkin cake recipe from the Laura Secord Canadian Cookbook, albeit a modified version to suit 21st century pumpkin tastes. (What makes the originally cake specifically from Calgary, I’m not sure.) I changed the spices to more of a blend of warm, autumnal spices, including cloves and ginger, which always go well with pumpkin. In addition, I swapped shortening for butter because—hey, who doesn’t like butter? The original recipe used very little pumpkin, so I increased that to one cup. If you eat pumpkin cake, you want to taste the pumpkin’s flavour! 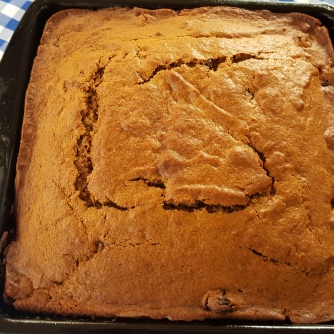 1. Heat oven to 350F. Grease an 8×8″ square baking pan.
2. Cream together butter and sugar. Beat in eggs, one at a time.
3. Add vanilla, buttermilk, and pumpkin. Mix until well incorporated.
4. Add dry ingredients and spices. Mix. Fold in raisins.
5. Bake for 45 to 50 minutes, or until inserted toothpick comes out clean.

Because I found the cake a bit dry, I served it with a Grand Marnier cream cheese icing. I think the cake could also be served with butter, similar to a loaf or muffin. 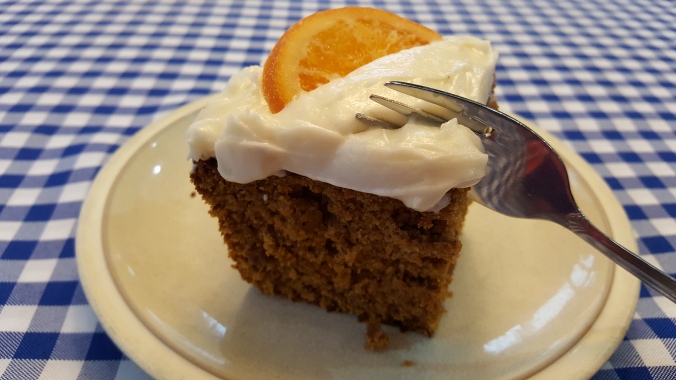