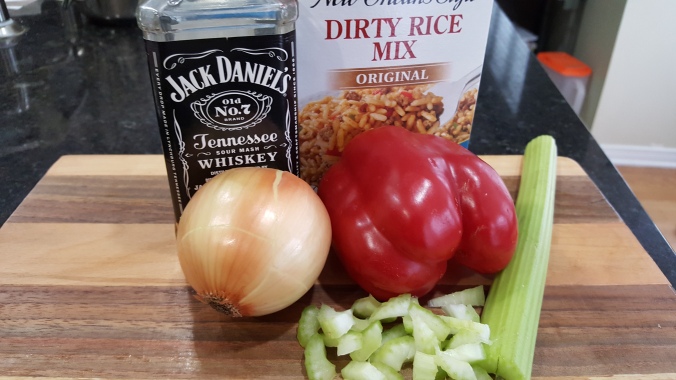 It’s no secret that I love food and flavours from other countries and other times. There’s something intrinsically appealing to me about a curry, or a medieval meat and fruit pie, or just an unfamiliar combination of spices. When I travel, I seek out “local” flavours and restaurants in my quest to try new flavours.

In a couple weeks, I will be visiting New Orleans for the first time, so I’ve been in a Creole and Cajun frame of mind lately. The city is famed for its cuisine: fresh seafood, spices, African and Caribbean influences combined with French flair. The food scene sounds excellent, and I look forward to exploring it.

In the meantime, I decided to cook up some New Orleans-inspired recipes of my own. This was a weekend meal, and it takes some time to marinate the meat. As a starting point, I found an interesting recipe for Bourbon Chicken, which I modified to suite my tastes (and to cut down on the sodium and overall richness). Bourbon Chicken may not be “authentic” New Orleans food, but certainly bourbon is associated with the Deep American South. The resulting recipe was a sweet and salty tribute to Southern Food that I will definitely be making again!

I served the Bourbon Chicken with dirty rice, another Cajun staple. For the rice, I used a boxed Dirty Rice mix, and added some chopped onion, celery, green bell pepper. Onion, celery and bell pepper is considered the “holy trinity” in Cajun cooking, and forms the basis of many famed dishes, including gumbo and jambalaya. I softened the vegetables with a half-pound of ground beef, then followed the box instructions. To serve, I sprinkled chopped green onions on the rice.

The finished product may not have been beautiful, but it was homey and delicious!

One thought on “Bourbon Chicken”